“When luck suck everybody fucks” 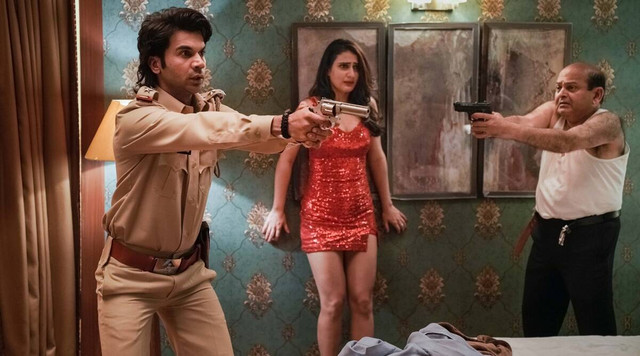 Anurag Basu's latest Netflix release Ludo is a case of Bollywood romanticism done right. It is a reflection of what it means to be Indian, from the narrative of the ideal husband drilled into women to the spiritual lens through which the country comforts itself. A game of ludo that the characters populate, color coded and navigating through the game with pure chance.

If you have seen Anurag Basu's Barfi! you know what you're in for. Basu's uses his directorial powers with a lot of responsibility, there is never a moment where your brain is not figuring out the permutations that the scene has to offer. The kitsch involving the child actress is forgiven by the meta-narrative which further liberates the movie from any narrative misgivings. Discussing the meta-narrative would mean divulging spoilers but it relies on classical Indian philosophical inquiry to push the story forward.

Take the case of Ugly, another film that runs on the plot line of interwoven stories revolving around a missing child, the police and opportunistic people that try to profit from the proceedings. The film by Anurag Kashyap has irredeemable characters populating a story with no hope. The discretion of the meta-narrative is dependent on the viewer. The judgement of the characters is upon the viewer's discretion. Ludo's meta-narrative solves this problem making the story palatable and approachable for subsequent viewings.

Throughout Ludo I was wondering how much of a delight it would've been to watch it in the kinos, it's the kind of of film that warrants buying popcorn and dream about movies in themselves. It is sad that the colloquial paisa vasool (“bang for the buck”) has to happen over a Netflix subscription over the box office. Talking about meta-narratives and then Covid.. the picture goes on.

(Ludo and Ugly stream on Netflix)

... or Odenwaldschule on optical cocaine

Sex Education Season 2 is here, released on the 17th of January — a Friday, to suit your binge-watching needs. All eight hours of your time expended for the pure pleasure of see beautiful people worry about their sex lives and other dramatic tropes. Everything is perfect: the screenwriting is in top form, the characters are all well etched for a nominal viewing, the cinematography lulls you into thinking the show is better than what it is but the greatest achievement of it all is that Netflix hides in the background without once making its presence too imposing on the screen.

I don't pay for a Netflix subscription, my partner does along with four other people for a sum of €3 a month. That's a paltry sum for enticing me to binge-watch for hours, the economics don't add up in the end. So for the quantity of content I get for the price point, I must be fed absolute visual junk to while my time away before the start of another day as a productive member of the society.

This is my general gripe with almost all of Netflix's shows these days, they have an interesting hook and after a few episodes they plunge into private label factory produce with stock characters, story arcs and music choices. The writing usually is top-notch, following all the rules of an efficient drama but this perfection in everything lends a sterile viewing environment where the sense are numbed for the lack of any challenge.

Sex Education has an interesting premise but when viewed away from the binge-watching euphoria, it is nothing but shallow. It feels like a fictional version of the Odenwaldschule, where everyone sleeps with everyone else and no real studying seems to happen at any given point. Everything is focused around sex for the students, teachers, the headmaster and even the plumbers and shopkeepers in this fictional village. There is no sport, no classes and no other aspect of teenage life that demands attention, the most popular things to do seem to be a visiting a Sexual Councillor, either real or fake.

The sappy character arcs can be seen episodes away, giving enough time for one to cook, to take a nap or check the occasional Reddit post. The show doesn't demand any serious attention as it's not made to start a conversation but rather to serve as a primer for an awkward small talk incubator at a work lunch or an excuse to have that Netflix account running for one more month. Sex Education is all those sappy Saas-Bahu soaps but with a greater budget. The idea is just the same, to be hypnotized for a little while and go about the day without thinking much. While I'm unconsciously entertained, I am not going to sign-up for Netflix anytime soon.

If you're looking for something memorable and consuming only a fraction of your time, I recommend Napoleon Dynamite from which this show invariably draws a lot from. But if you just want to look at pretty people having a cornucopia of frivolous sex problems, then enter the black box and get some subliminal Coke advertising in the process.