On the nature of film. 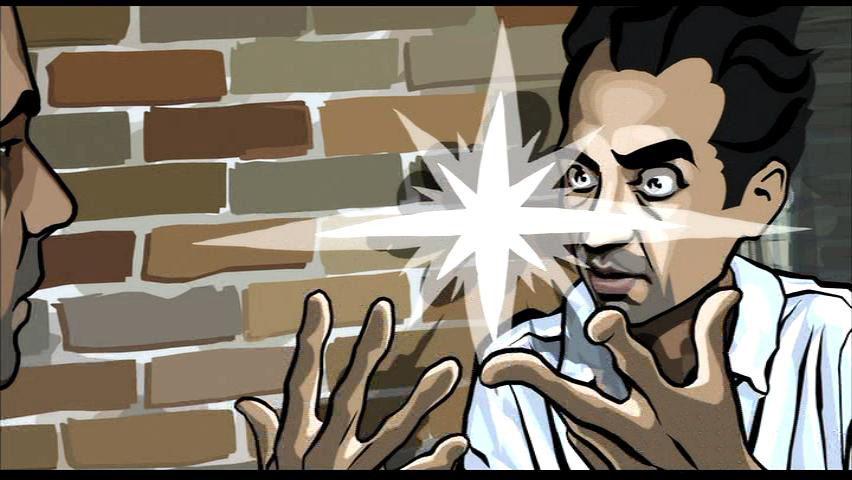 A cinema plays in the background as someone cooks in the kitchen. A TV show fills in for company at a dinner table. Videos on Youtube incite anger while travelling to work on the bus. Watching movies in a theater takes you away from yourself and attempts to dream you into a world not so different from yours, yet so different.

Which one of this gives the best viewing experience? Film in itself is a very dictatorial art process, more dictatorial than say, writing. When a person writes, it her thoughts alone that play on the paper. There will be outside influences, sure, but they are all blended into the writing process where they are indistinguishable from the author's. In the case of film, it is the director who calls the shot at the end of the day or it is the producer by the virtue of having money or it is the actor, for having a face that can sell. In this case, the power is centered in a few people while the work is of hundreds of technicians, craftsmen and administrators. This gives film a far more central perspective than other works of creation. The second person in the hierarchy of making a film is far removed than the first who calls the shots, creating a huge imbalance of power that in fact presents the best idea forward: it can be money, it can be stardom or it can be the auteur who rules the roost.

The counter-argument to this could be that only a few writers are published at the end of the day. Writing however is more universal than filmmaking, making a film is a labour intensive process that demands a high level of skilled technicians across various domains, meaning your ordinary person on the street has very little probability of making a film that can act as a thoughtful Whatsapp forward while the same person can embed a pdf file with a 20 page story.

Youtube videos, personal videos, news, TV shows all of them fall under the category of perpetually made media where one can consume an inexhaustive variety of content that seems to emanate from a bottomless pit. We as audience can always distinguish between a film and a TV show or a YouTube video. Part of the reason is that “cinematic” look, while the other is also the level of intense detail that a film has to carry in its duration unlike a TV series that has the benefit of a few to many hours of time at its disposition.

Films are one-off projects that takes years in gestation and require to tell an effective story in the time allotted, which makes them also very pregnant with information and substance. Even a bad film can be evaluated for its demerits, say an actor's ego or the simple lack of technical finese but the same cannot be said about TV or a random video on their internet even though all the media's primary aim is to engage and at some level, entertain. The overall complexity involved in making a film and then bringing it to the people is multiple hoops farther than the average TV show. Though Netflix and Amazon are trying to bridge that gap by making cinema disposable, they have the same net effect as say television before them or pirating. A movie is made for the big screen and the eyes cannot be lied to even though the wallet has feelings of its own.

I keep asking myself this question, why movies? Over the course of the last fifteen years I must have watched thousands of movies in different settings, to the point I know the tropes, what to expect and a general immunity from being immersed into the medium and still I find them compelling. They could be termed as an addiction but sure I can let months pass by without watching a movie but when there is the possiblity to watch one, I give it a shot. It could only be seen as an interpretation of a sort of reality, the closest I have to get into someone else's skin and watch their fabricated world from behind their eyes.

In this respect watching a movie is a very personal act, it is not something together with someone rather going alone and having an individual experience of seeing someone's world from through their head while being in yours. It feels like I am finding another narrative to understand Being John Malkovich, but watching a movie is what it is, going to floor 1.5 sandwiched in the very world with moving people and experiencing what it is to be another person/s.

The fact that movies are also made for theaters primarily and not for computer or television screens tells a lot about the focus demanded while watching a movie. Watching video on a laptop screen or a cellphone is a very passive form of demanding attention, there will be always other real world scenarios that demand attention – the real world scenarios of being in a bedroom, in a kitchen, in a train or waiting in a hotel lobby. These spaces also allow someone to observe the reality that exists outside the synthetic reality of the video and by the virtue of being real it demands more attention. Whereas the primary viewing place of a film is in a theater is a synthetic space made for the consumption of a synthetic reality, which demands that nothing else in that room is more interesting than the happenings on the screen.

Film is the ultimate culmination of all the previous forms of art – what can be a better emulator of reality than an interpreted reality? Livestreaming could give more insights to our human condition but that is boring as it does not have the necessary drama to keep us engaged. As a story telling and mythmaking device, cinema is one great expressive medium. Check out your local kinos for movies that are being played and buy yourself a ticket and treat yourself to a movie without judgement. Try to find as many details as you can or just allow yourself to drown in a new world, but use the medium as as meditative tool. Come out and see the world around you and see that for a fraction of a second has become cinematic. And there you are the hero of your own story.